With insight from Ashley Madray, Executive Vice-President and Partner of Gas Innovations

Bulk gases have a variety of applications, including metals manufacturing, medical, biotechnology, and food and beverage. These bulk gas deliveries are critical to meeting the service levels and consistent supply required by customers, especially those in remote locations.

Though the make-up of the market varies by region or geography, bulk gas distribution is a huge part of the industrial gas supply chain, representing as much as 27% of revenues in 2017 according to gasworld Business Intelligence. In fiscal terms this equated to around $19.8bn of revenues, in a global commercial industrial gases business worth around $73.4bn that year.

In North America, bulk gas supply still accounts for a significant portion of the supply chain, despite the proliferation of production plants big and small across the region.

Texas-based Gas Innovations is an independent wholesale provider of hydrocarbons and services for the industrial gas industry, offering the smallest portable, disposable cylinders to the largest bulk containers; traditional cylinders; tube trailers; cryogenic ISO containers and international shipping containers. Its services include the ultrasonic testing of cylinders, tube trailer leasing, spot services for nonhydrocarbon gases, pipeline backup supply of natural gas and other gases, and the project management for temporary and interim supply of gases.

In order to gain insight into the evolution of the North American bulk gas business from the perspective of an experienced insider, gasworld spoke to Ashley Madray, Executive Vice-President and Partner of Gas Innovations.

Madray spent the past 10 years in the packaged gas/welding supply distribution business, but left the industry for a year to trade natural gas before forming Gas Innovations in 2002.

While bulk fills and on-site gas generation are highly effective for large volume end users, a precipitous gap has existed for packaged gas users whose needs were of a significant volume, but not quite at the levels where bulk deliveries made economic sense. Over the past decade Madray has observed a very thorough maturation of the small bulk supply of atmospheric gases.

“In the portable area, a much larger portion of cryogenic liquids is now shipped in cryogenic ISO containers. On the riskier side, the shrinkage of majors has led to a backward integration by the distribution side of the industry into bulk activities. More and more liquids are delivered by independents than ever before.”

Since its formation, Gas Innovations has continued to expand by backward integrating into the supply and distribution of hydrocarbons. Much of this was not guided by the company, but was somewhat a reaction to the demands of the market.

“Ten years ago there were very few LNG plants from which to pick up LNG in trucks. Now every region of the country has several plants. The world did not have cryogenic ethane by truck until 2017, so our investment in that business was strategic prior to being profitable!”

In today’s ultra-competitive market with stricter regulations, the pressure to reduce operation costs has never been higher. Because distribution costs weigh heavily in the total product cost, optimized distribution solutions that reduce consumption and lower operational costs over the life of the asset provide a major competitive edge.

Optimization has been a major trend in North America. As a result, for the same annual volume of transportation, the number of vehicles in the fleet has been reduced, as has fuel consumption and maintenance costs.

“We would love to claim the success of some of the new transportation technologies. I think those developments come from the demand for liquefied natural gas (LNG) and compressed natural gas (CNG) as well as other technological developments. If we had anything to do with this, it would be related to the fact that we try not to say no, but look for how we might say yes. Our team gets this and enjoys that type of service and work.”

Madray believes that the success at exploration and production (E&P) has far surpassed the balance of the oil and gas industry. “We are always looking for more secure supply; less transportation sensitive supply. Many of our products come from minimal source locations. We have imported hydrocarbons from across the globe when they were not available here. We have also shipped them across the world from the US, as the US was the only source. This really speaks to the development of the E&P in oil and gas. This has been driven by the technological success of hydraulic fracturing (fracking) in the shale plays.”

“The mid and down stream markets are trying to catch up. Evidence of this is of course the build out of the LNG plants and development of new uses of ethane and propane and the export of these,” he explained.

Since its inception, Gas Innovations has invested heavily in assets for its products.

“We do not enjoy the gas sale unless we have the corresponding package, as we have invested in many assets, we have also developed many relationships with asset providers for the leasing and temporary usage of these tanks, tankers, railcars, ISO modules, etc.”

The future of bulk gas supply

“We would love to claim the foresight of the demand of the evolution of technologies related to cryogenic hydrocarbons! This expansion and evolution was really driven by the shale development of E&P of the oil and gas industry.

“Having open minded and trusting partners and a fantastic team of employees helped us understand the world’s demand for cryogenic hydrocarbons. Our location in Houston has made for a better understanding of hydrocarbons for sure. Some of our team have been very focused on the developments around LNG. Their insight, forecasts, and prompting have lead us to make our investment decisions and allocate our resources. With that said, we believe that the trucking of LNG will rest with our industry in the long term. This sentiment is occasionally voiced by much more seasoned and esteemed members of our industry. We believe that the continued success of LNG development will make the truck load transportation needed in the US and across the world.”

Posted in Articles
← Gas Innovations Exhibits at Gastech LNG Conference in Barcelona, SpainGAS INNOVATIONS will have a booth at the LNG Summit February 26 / 27 → 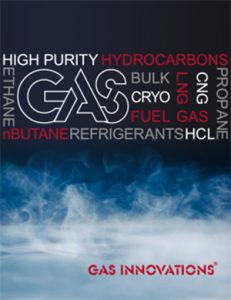